Throughout her whole adult life, Tania has been fascinated by exploring the malleability of consciousness and by creating bridges between the contemplative wisdom traditions from the East and the western sciences. Based on her own personal retreat experiences as well as her years-long engagement with the Mind and Life Institut, she has participated in and helped organise countless science-spirituality dialogues including great spiritual masters such as His Holiness the Dalai Lama or Brother David Steindl Rast. 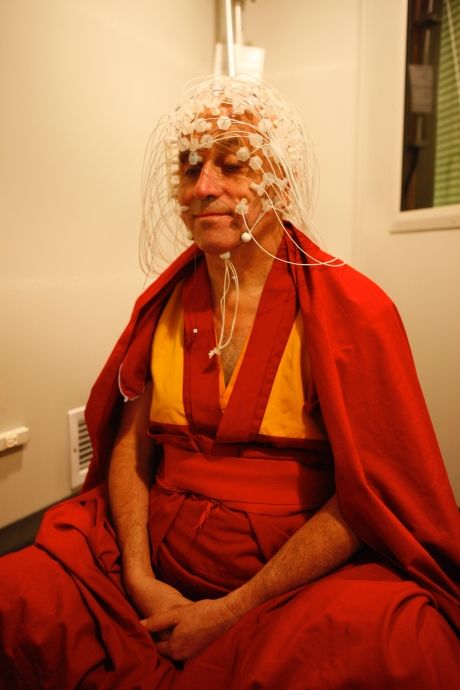 Matthieu Ricard in the Lab

Matthieu Ricard, a French Buddhist monk and long-term practitioner, writer, photographer and translator of the Dalai Lama, who himself was a former scientist working as biologist at the Institut Pasteur, has been a very important inspiration for Tania’s work in the domain of contemplative sciences. Not only has he become a dear friend and taught her much about Buddhist philosophy and practice, he also served as “guinea pig” when Tania started to investigate the plasticity of empathy and compassion in expert meditation practitioners. By repeatedly scanning his brain while he was practicing different types of meditation, they both worked together to develop important insights such as the distinction between the brain networks underlying empathy, empathic distress and compassion. He was also an important influence in the early phase of developing the ReSource Project.

“More than just being yet another institute, Mind and Life is a warm-hearted community of like-minded friends spread across the world”

Her Engagement with the Mind and Life Institute

Tania has always been involved in the interface between contemplative traditions, spirituality and science. One institution that has accompanied her path for many years is the Mind and Life Institute, founded in the 1980 by the neuroscientist Francisco Varela and His Holiness the Dalai Lama.

Her first encounter with the Mind and Life Institute was in 2004 in Dharamsala where the Mind & Life XII dialogue on “Neuroplasticity: The Neuronal Substrates of Learning and Transformation” took place at the residency of the Dalai Lama. Just a few month later, back in London, she started working with the Buddhist monk Matthieu Ricard and suggested to the board of MLI to co-organize a conference with him on compassion and altruism in economic systems. This meeting took place in Zürich in 2010. In 2012, Tania became a board member of Mind and Life International (MLI) and an advisory board member of Mind & Life Europe (MLE), a European sister organisation that she helped to co-found. In 2014, she also became a board member of MLE and an honorary board member since 2018. Her pro-bono engagement with Mind and Life has involved the organisation of several conferences, summer schools and network meetings in the domain of contemplative sciences. Some of these are portrayed in more detail below in chronological order: 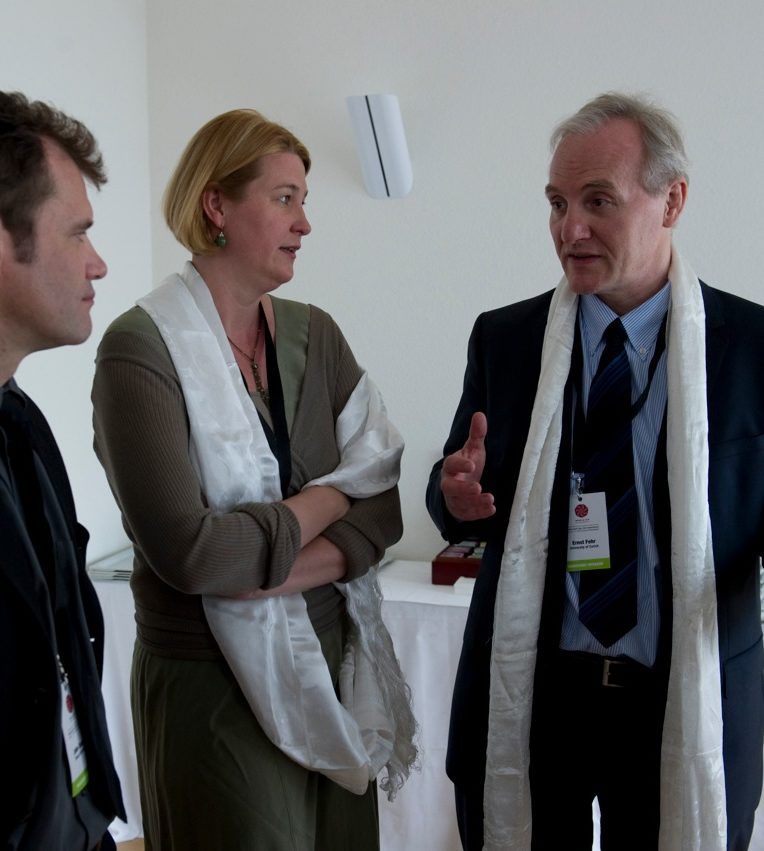 Altruism and Compassion in Economic Systems

2010 Mind & Life XX — Altruism and Compassion in Economic Systems: A Dialogue at the Interface of Economics, Neuroscience, and Contemplative Sciences

The motivation to propose this conference to the MLI board originated during Tania’s first encounter with MLI in Dharamsala in 2004. When she returned, she wrote to Richie Davidson, a former board member of MLI, proposing a conference on the neuroscientific bases of empathy and compassion. Through her move to Zürich and her appointment as professor in an economic faculty, she observed that concepts such as empathy, compassion and even altruism were not part of classic neoliberal economic theory, and thus she extended her proposal to include economic theory and sciences into this dialogue. Together with Matthieu Ricard and Diego Hangartner, she embarked on organising a conference which for the first time brought economic aspects into MLI dialogues. Zürich as a well-known global financial centre was an ideal location for such a dialogue.

This conference facilitated dialogue between Buddhist contemplatives, economists, social activists and scientists from various fields who have been exploring a new understanding of the role of psychology, emotion, altruism and human values in economic systems. Classic economic theory is based on the assumption that humans are self-interested and rational actors, and casts doubt on the very existence of altruism. New research in both psychology and the social neurosciences, and especially the field of neuroeconomics, has however revealed a much richer and more complex picture of humanity, where altruism and compassion are not only part of the equation but can also be encouraged and learned. Further, research is revealing that pro-social behaviour is critical for the survival of humanity, while egoistic and non-altruistic behaviour is antithetical to human well-being. These findings have profound implications for public policy and the shaping of future economic and financial institutions.

The dialogue has been summarised in the book ‘Caring Economics’

VIDEO from the Altruism and Compassion MLI Conference 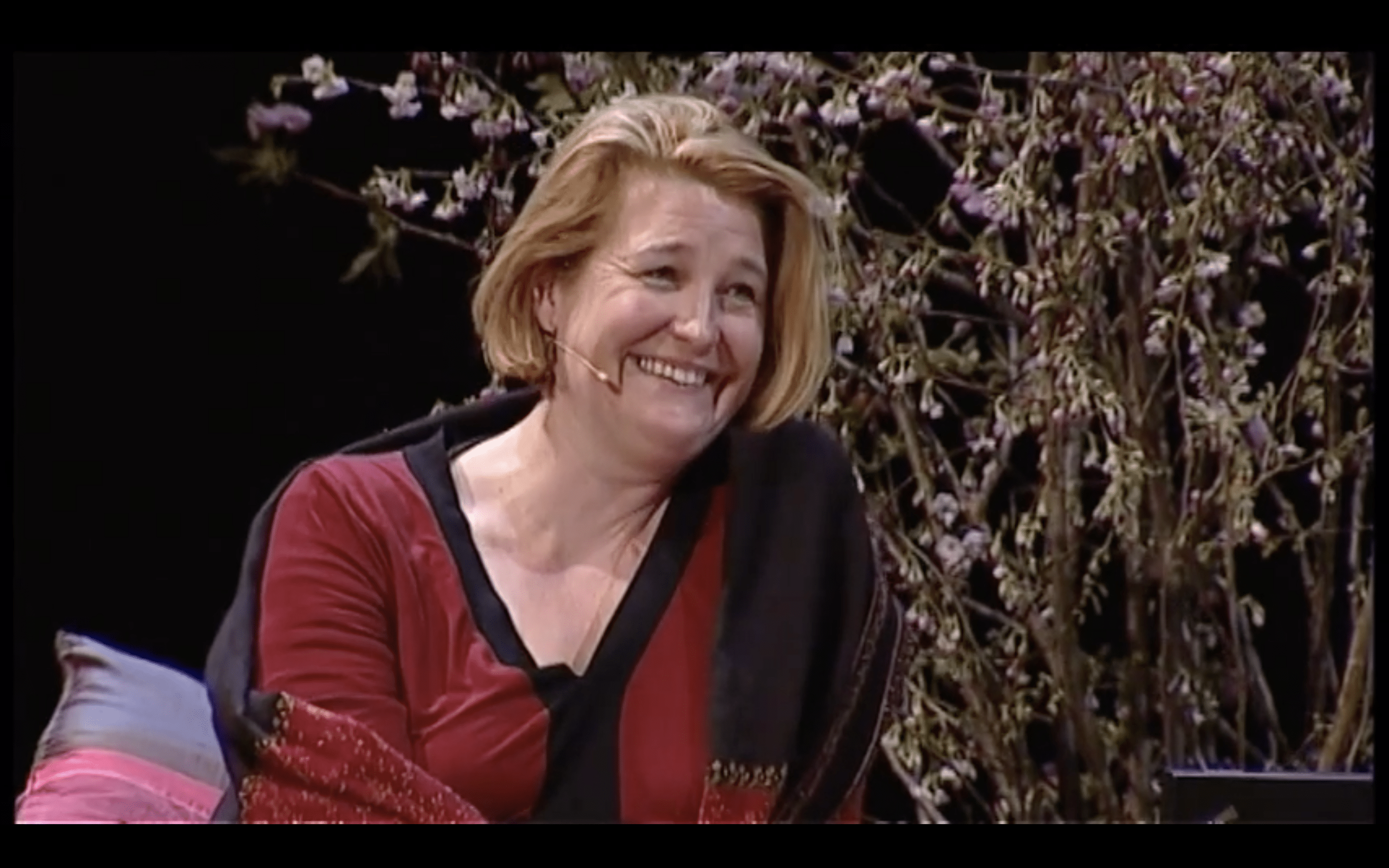 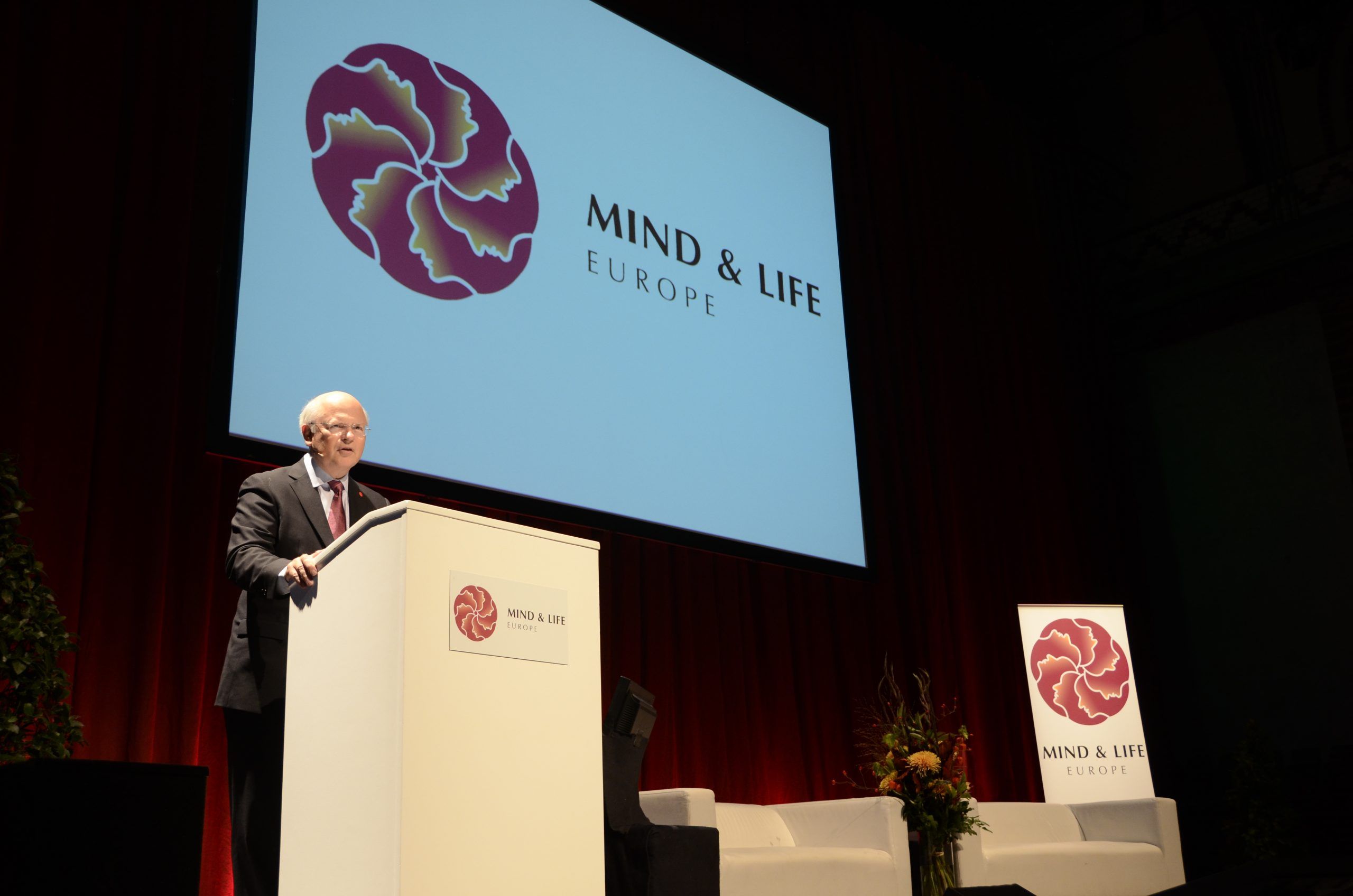 A long-standing idea to create a sister organisation of Mind and life in Europe was concretised in a meeting conveined by Arthur Zajonc, former president of MLI in the US, in the context of the MLI symposium in Denver in 2012 (see first picture below). Diego Hangartner was the first director of Mind and Life Europe and created a MLE office in Zürich. One of the first founding MLE meetings with the European Mind and Life community followed in Paris, the home town of the late Francisco Varela (see second picture below).

Just one year after the creation of Mind and Life Europe, the first MLE symposium took place at the Radialsystem in Berlin from 10th to 13th October 2013. This conference with the title “Individual and Societal Change from the Contemplative Perspective”, hosted about 400 participants and facilitated a dialogue between Buddhist contemplatives, neuroscientists, clinicians, economists and social activists.

The second MLE symposium took place in Fürstenfeldbruck in 2019, close to Munich. 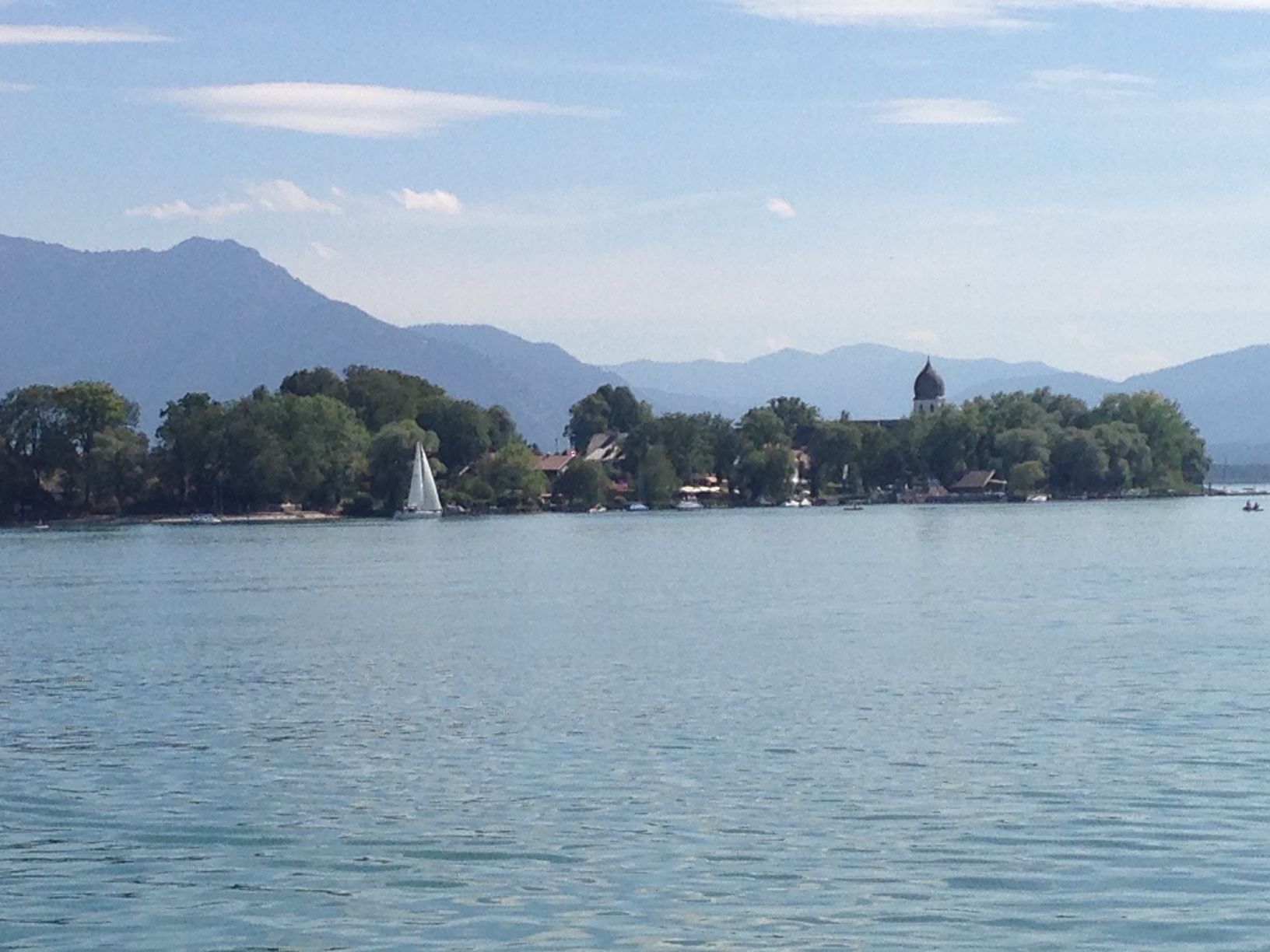 A Week on the “Fraueninsel”, Lake Chiemsee

Together with the board of MLE and Diego Hangartner, Tania helped initiate the first European Summer Research Institute (ESRI) in 2014. The location was the Benedictine abbey of Frauenwörth on the small island called the “Fraueninsel” (female island) on the beautiful Bavarian lake Chiemsee. The wonderful Frau Scholastika (see picture below), one of the Benedictine nuns running the abbey, beautifully hosted this event.

The ESRI is a summer school now organised regularly by Mind & Life Europe where scientists, educators, professionals and researchers working in the field of contemplative science can assemble as a community to share ideas, experiences, and knowledge from their lives and work. The conference, with high-level faculty and a semi-retreat format, offers a unique setting and plenty of opportunities for deep dialogue across disciplines, as well as inquiry through and learning from first-person experience. With its unique format, ESRI helps to advance the training of a new generation of interdisciplinary scholars and researchers. 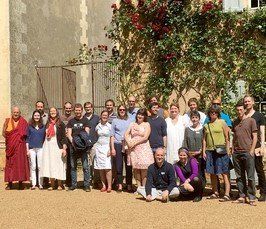 In her function as Mind and life Europe Board member, Tania initiated together with her colleagues Antoine Lutz and Elena Antonova, the “European Neurophenomenology, Contemplative, and Embodied Cognition Network”, called in short ENCECON. The goal is to create a community of empirically working psychologists and neuroscientists who are interested in combining first-person and third-person methods, i.e. combining subjective phenomenological reports with classical objective measurements.

This vision was already formulated by Mind and Life co-founder Francisco Varela who coined the term “neurophenomenology”.

The first MLE Hub Meeting of the European Neurophenomenology, Contemplative, and Embodied Cognition Network took place for an entire week in June 2016 in the beautiful Château de la Bourlie in France. The focus there was on exploring first-person methodologies and the topics of body awareness and consciousness in general. 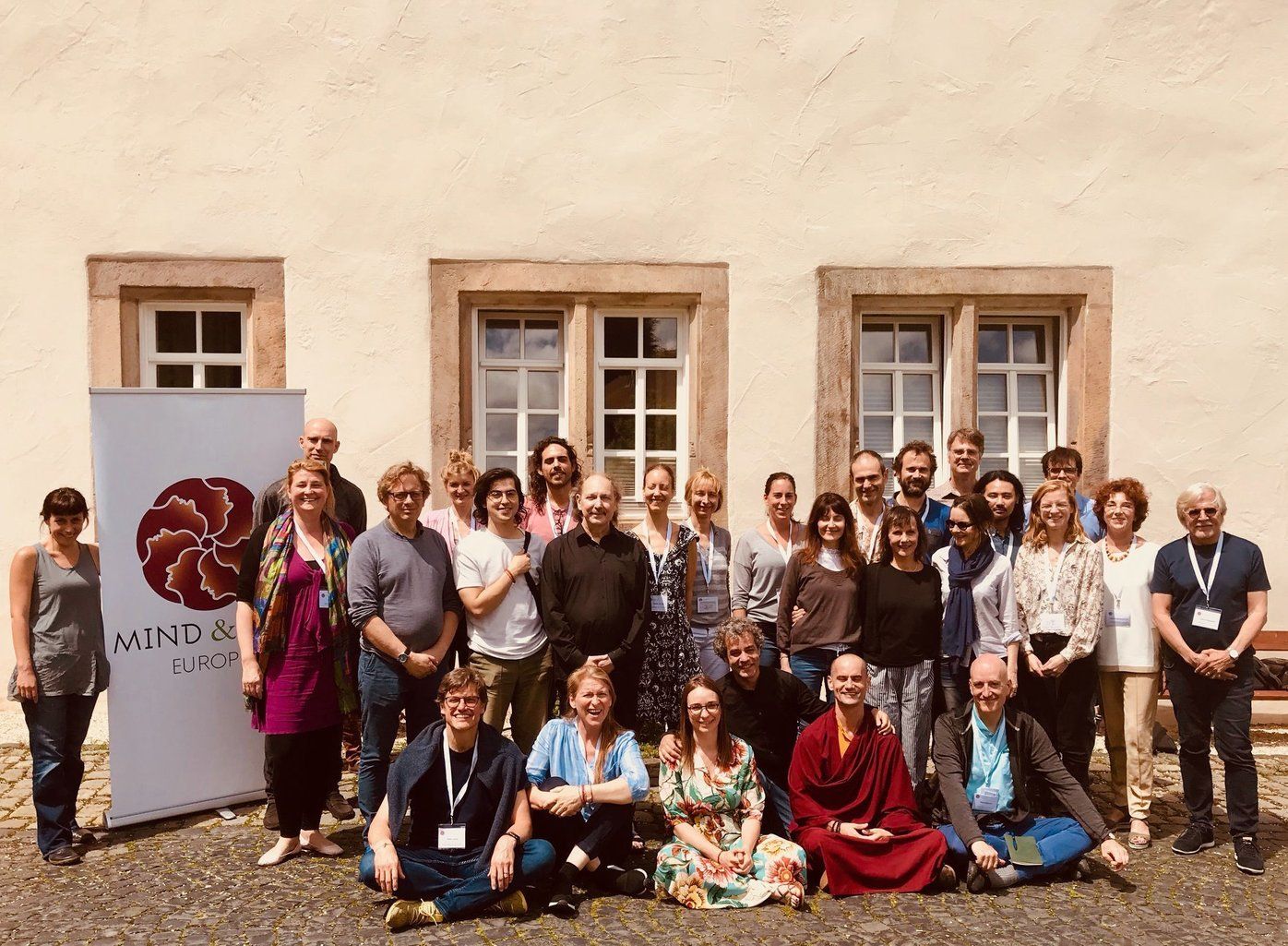 The second ENCECON Hub meeting again hosted by Mind and Life Europe took place three years later, from 11th to 15th June 2019 in Schloss Buchenau, Bad Hersfeld in Germany. The topic of this workshop was Altered States of Consciousness: Comparing Meditation, Hypnosis, Trance and Psychedelics from a first- and third-person Perspective. The aim of the workshop was to explore the similarities and differences in phenomenology and the neural dynamics of meditation, hypnosis, trance and psychedelics. 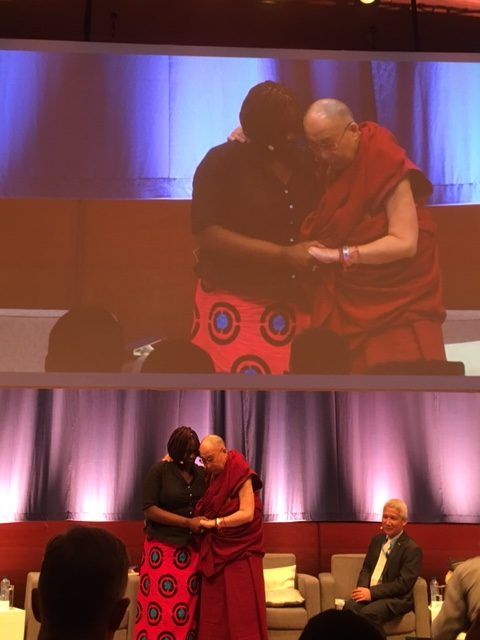 A 3-day dialogue with the Dalai Lama

Balancing Power and Care in our Modern World

The inspiration for this Mind and Life Europe conference came after an audience Tania had with His Holiness Amma (Mata Amritanandamayi), a female Indian spiritual teacher, on October 2012 during her visit to Berlin on the role of the female and male principle in our modern world. During this conversation, Amma repeatedly stressed the necessity for the female principle – strongly associated with concepts such as care and compassion – to be more highly valued in our modern financial and political systems. Inspired by these ideas, together with the 2010 Zürich conference team, Matthieu Ricard and Diego Hangartner, Tania started to design an MLE conference entitled “Power and Care”. One important aim of this MLI dialogue was to balance the number of female and male speakers as well as the countries of origin on the panels, because in previous MLI dialogues the majority of dialogue partners had mostly been white male scientists from Europe or the US. Another novelty was the inclusion of practical and experiential workshops in the afternoon and the arts. For example, the artist Olafur Eliasson created a solar-based light-sphere which illuminated the conference venue, the main hall at the Bozard, the Palais de Beaux-Arts in Brussels.

After four years of preparation, “Power and Care” finally took place in September 2016 in Brussels, Belgium, and was co-organised and hosted by the new managing and conference directors of Mind and Life Europe, Sander Tiedemann and Cornelius Pietzner. It was a three-day Mind and Life Dialogue with world experts and his Holiness the Dalai Lama. The dialogue integrated perspectives from the natural and social sciences, anthropology, psychology, politics and economics as well as multiple contemplative traditions.

While the notion of power can be seen as a neutral concept, neither harmful nor beneficial by definition, the western historical perspective links it to concepts such as domination, instrumentalisation, or sovereignty. This idea of power as “power over” is apparent in the political, societal and interpersonal spheres, as indicated by problems such as the wealth gap, racial and gender inequality, and countless others. At the other end of the spectrum is the notion of caring for, an enabling force in the service of individual and social transformation. Care evokes concepts such as altruism, compassion, interdependence and responsibility, and is customarily seen as incompatible with the notion of power.

Life Videos from the Power and Care Conference 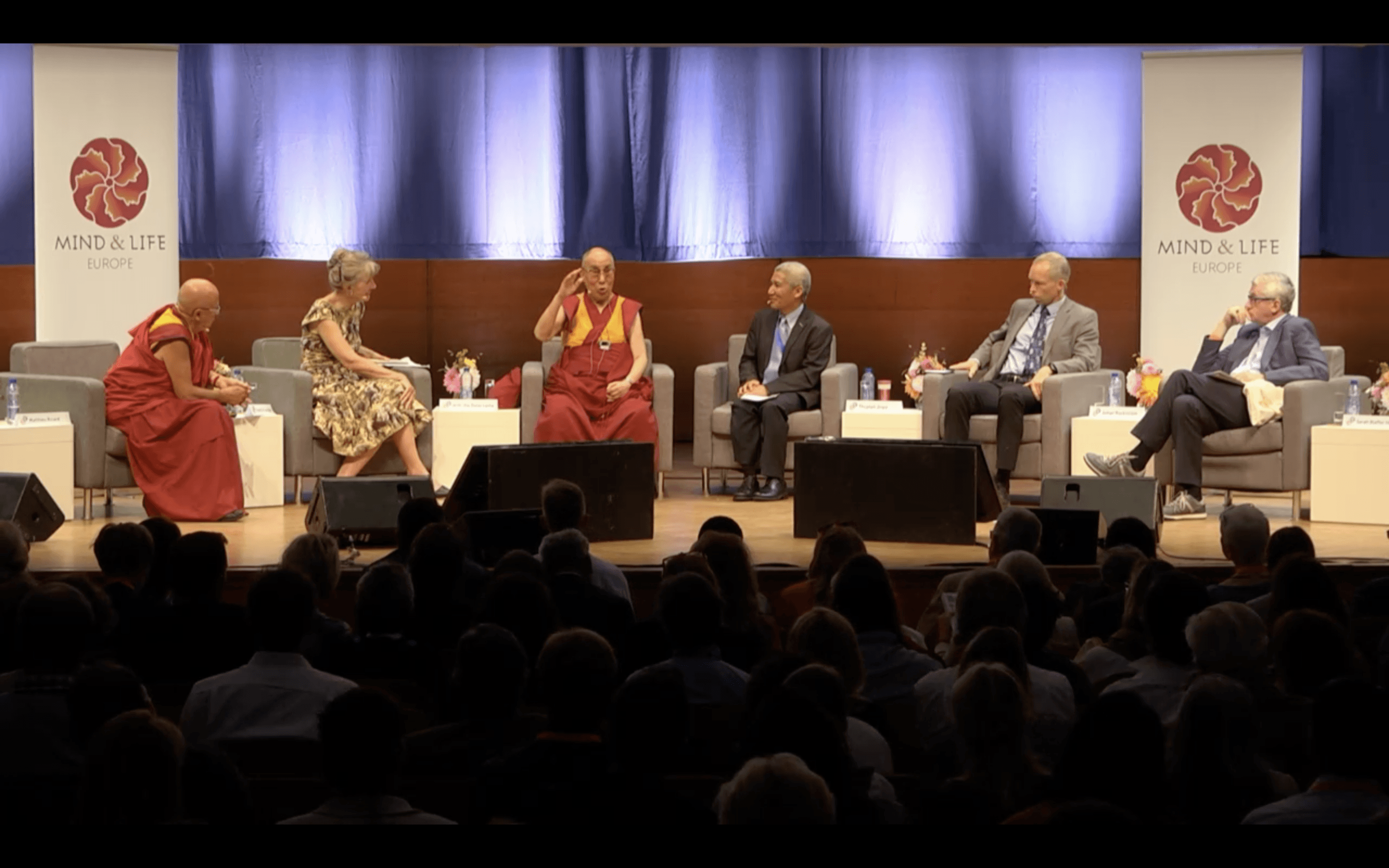 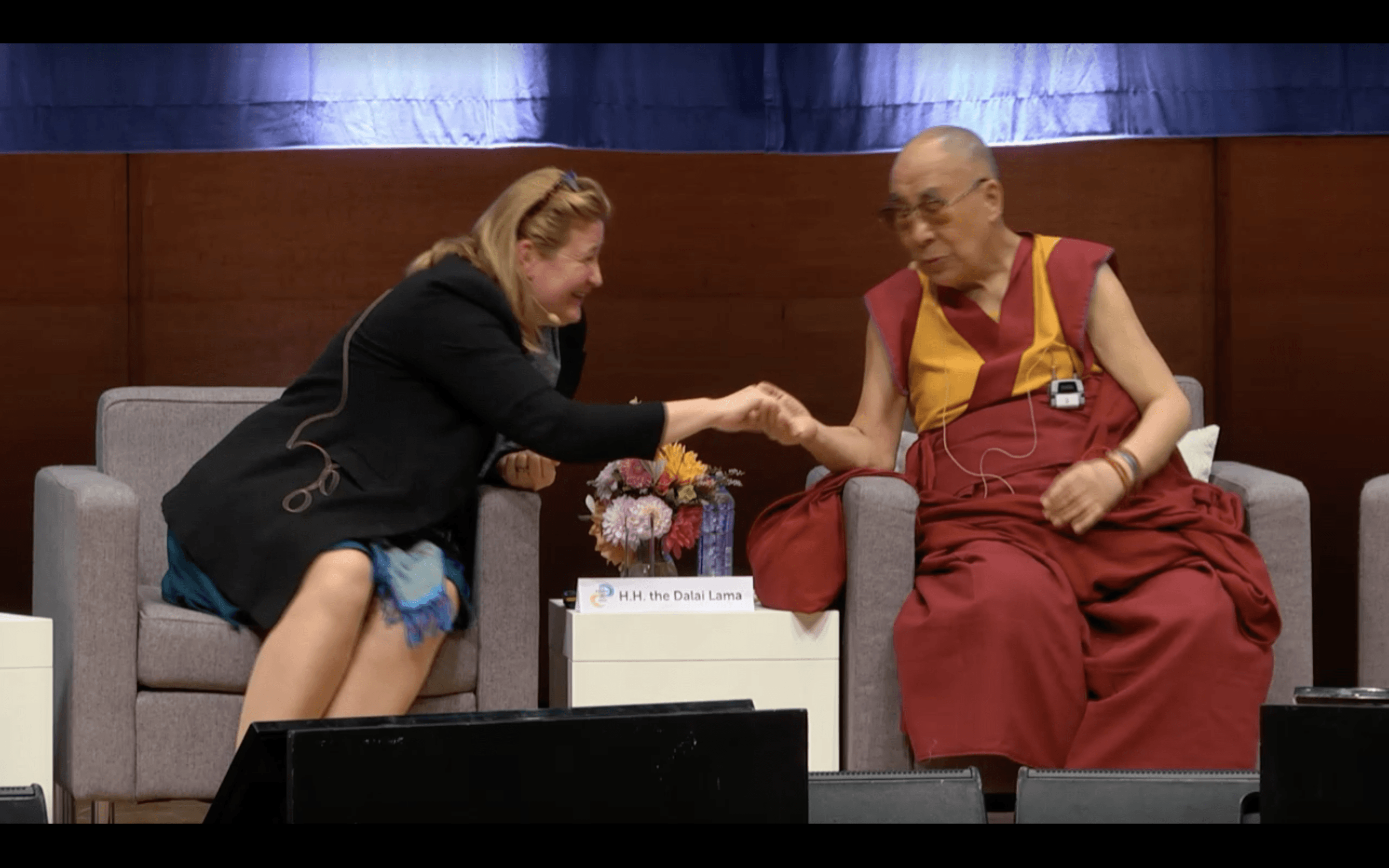 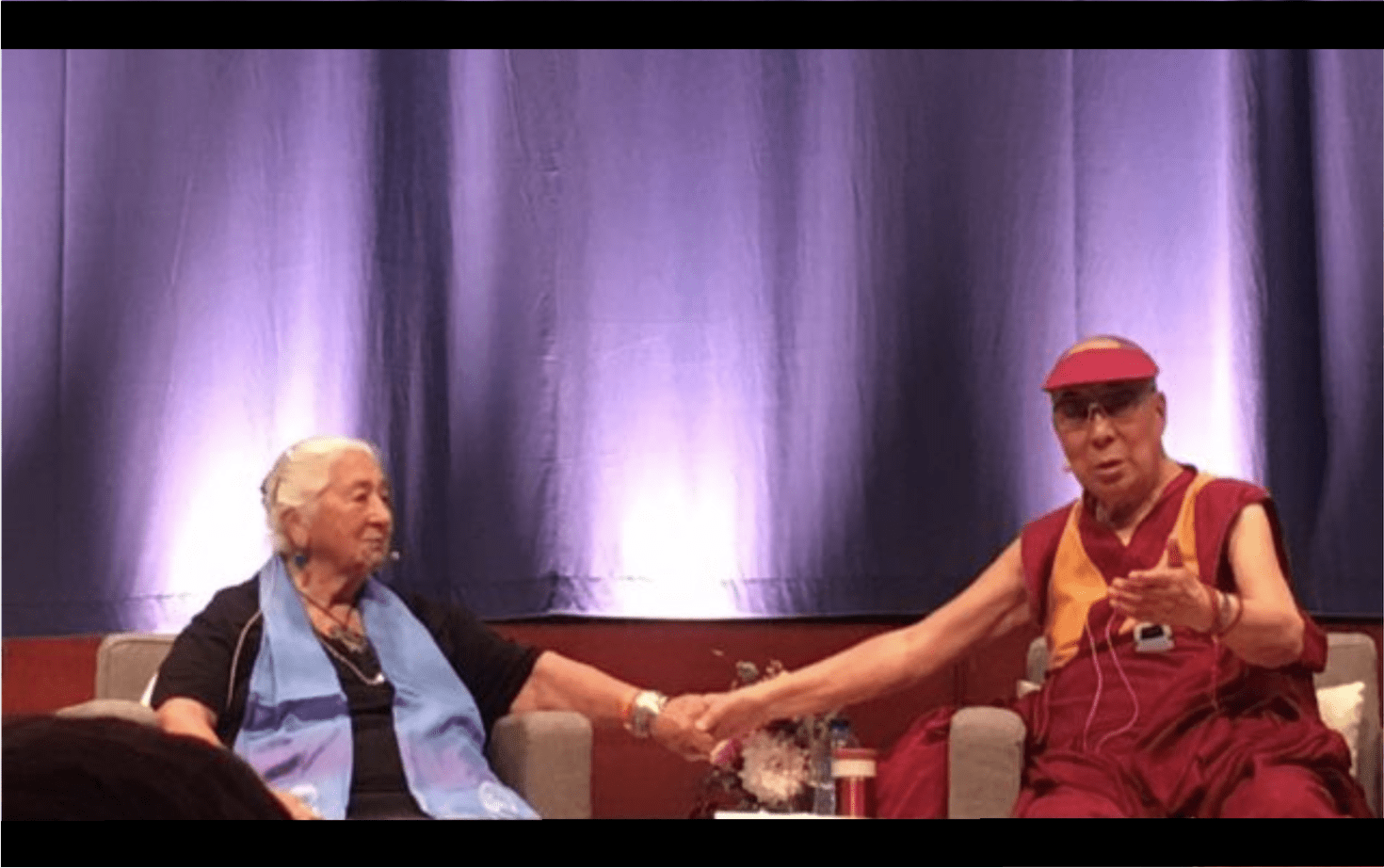 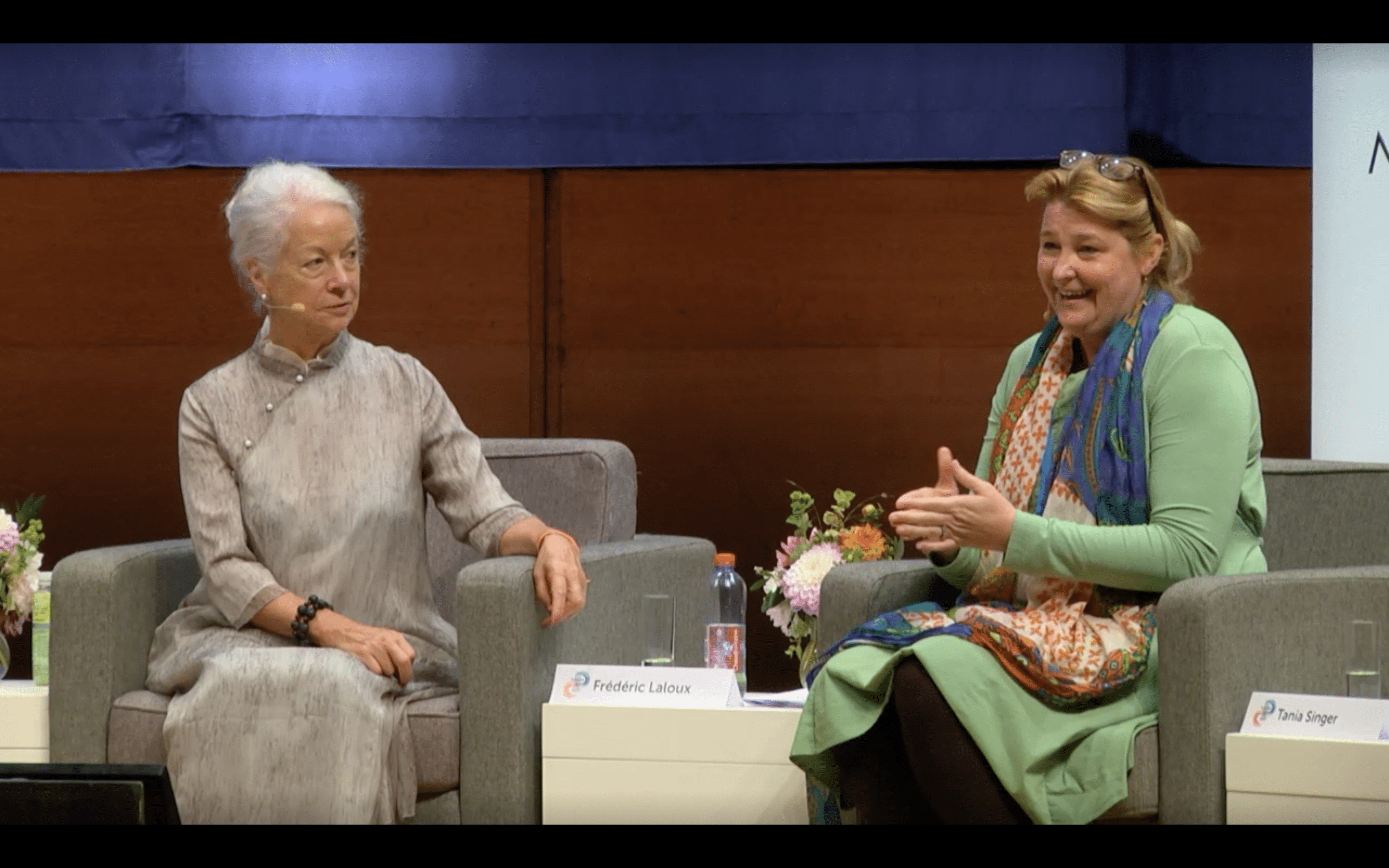 People who greatly Inspired Me in this line of work

My Picture Wall of Gratitude

During my years working in contemplative sciences, I have the chance to meet incredible people, scholars and spiritual teachers who deeply inspired my work. Without the lessons I received from many of these wonderful beings, I could not have created the training protocol of the ReSource Project.
With this picture wall I want to express my deepest gratitude to you all for having inspired me, being my friends over all the years and working with me on so many important projects.